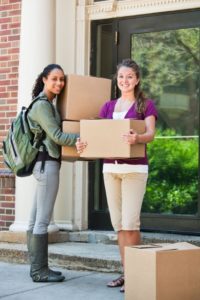 Congratulation on your child’s achievement!  As you prepare to send your child to college let’s review some important items.

Soon you will be heading out shopping with your college student to get them ready to go back to school this August.  As they gather all their “stuff” did you con

sider if you have coverage for their stuff while it is at college? Check out my article “Child leaving for College” to find some answers.

Is their “stuff” covered while at a dorm or off campus apartment?

Generally, as long as your child is a full time student, was a resident of your house before moving to college, and is under age 24 there is some coverage for the students “stuff” while they are away at school. However, that coverage is generally limited to 10% of your contents (Coverage C) on your homeowner’s policy. For example, if the contents limit on your policy is $140,000, your child would have $14,000 of coverage for the “stuff” in his dorm room. There are limitations on certain items including computers, jewelry, musical instruments and collectibles.  If your child is taking any of these items with them to school, give us a call to review.

Even if you have some coverage on your homeowner’s policy you should consider a renter’s insurance policy for your student.  Why, you may ask?  If there is a fire in your student’s dorm or apartment and you file a claim under your homeowner’s policy you will lose your “loss free credit.”  This can amount to 20% of your premium.  That could mean $300 or more AND you lose the credit until you are claim free for three years. This has happen to a few of our clients.

Many people don’t think they own enough stuff to justify getting a renter’s policy.  I am going to let my son, Brian tell you his story.

In January of 2007, a fire broke out in the row home connected to ours. The firewall between our two apartments kept the fire from spreading into ours, but it did not stop the smoke. It also did not stop the water from flooding into the apartment through the hole the firefighters cut in our ceiling to release the smoke as they put out the fire. When all was said and done, we started the process of cleaning the things that could be cleaned and replacing the things that needed replacing, as we also searched for a new apartment. Before the fire, when I was first told how much coverage we should get, I laughed at my dad, thinking there was no way the old second-hand stuff I had collected while in college was worth that much. However, the cost of coverage was cheap and I trusted my dad’s advice. When the final costs of the fire had been settled and I realized I had spent close to $15,000 cleaning/replacing everything, I was very happy I had taken his advice. I didn’t pay for a thing, just my renter’s insurance and a small deductible.

Hopefully my story will convince anyone on the fence that renter’s insurance is well worth the cost. If you decide to get it, I highly recommend Spencer Insurance Agency. Yes, Charlie is my dad, but that doesn’t change the fact that he is one of the most honest men I have ever met, and he will provide you the same level of service he does to his own son.”

Thanks for sharing Brian.  Brian’s “old second hand stuff” cost $15,000 to replace.   What if he lost everything in the fire? The amount of the claim would have been much higher.  Contact us today for a renter’s quote.

By the way I did not even touch on what happens when your student takes a car with them to college.

How does my child going to college affect my car insurance policy?

If you have a student away at a college that is over 100 miles and they do not have a car with them, we can add a discount for “Child Away at School.”  If your child is taking their car to a college that is in the same state you reside, then we may be able to rate the car as being “garaged” at the college, rather than your household.  If the collage is out of state, however, it would need to remain as rated at your home address.

If you have any questions, contact us and discuss your situation with our experienced staff.

Fill out the form below and one of our
representatives will get in touch with you shortly!